Reaching out for a Healthier Tomorrow

Serving Emanuel County and its families for over 50 years.

Emanuel County EMS Director Courtney Terwilliger has been chosen as Georgia’s EMS Director of the Year for 2018 by the Georgia Emergency Medical Services Association (GEMSA).

The award was presented at the EMS Awards banquet held at the GA Freight Depot on February 21, 2019, in Atlanta, Georgia. The EMS Director of the Year Award is presented to a current Georgia EMS Director who has contributed significantly to EMS at the community, regional, and/or state level.

Chad Black, Chairman of GEMSA, also renamed the yearly Chairman’s Award as the Courtney Terwilliger Chairman’s Award due to Terwilliger's compassion and dedication throughout his tenure with the association and accomplishments on the local, regional and state level.

Terwilliger was first licensed as an EMT in 1977 and has worked with Emanuel County EMS as a medic, educator, and director providing service to his rural community. During his distinguished career, he has served as an EMS director for 40 years, overseeing one of the oldest ambulance services in Georgia. In that time, he also served his community as Emanuel County Emergency Management Agency director and as an integral member of the local hospital's management team.   As an educator, Courtney taught first responder courses, EMT and paramedic courses, vehicle extrication, and advanced life support courses.  In addition to his exceptional contributions at the local level, Courtney has demonstrated impressive leadership on the regional level, has been an active member of the regional EMS Council for his entire career and served as past chair of that organization.

While his accomplishments at the local and regional levels are indeed exemplary and worthy of this award, Courtney is most often recognized for his contributions on the state level. In 2007 the GAEMS awarded him the Excellence in Leadership Award and in 2010 he was awarded the Dr. Zeb L. Burrell, Distinguished Service Award.   In 2013 Governor Nathan Deal presented Terwilliger with the Governor's Public Safety Award for outstanding contributions to the profession.  In 2013 Speaker of the House of Representatives David Ralston appointed Terwilliger to the Georgia Trauma Commission.  The speaker reappointed him in 2018, and he currently chairs the EMS sub-committee.  In 2014 Governor Nathan Deal appointed Mr. Terwilliger to represent the EMS profession on the EBOLA task force.  He has served as a member of the state EMS Advisory Council (EMSAC) for 25 years and served for more than 14 years as the chair of EMSAC.  Courtney was instrumental in founding the GEMSA and was the first elected Chairman of the Board he served as chair of the Georgia Association for 14 years.   He was also one of the driving forces for the Enhancement of Patient Care Reporting Project, an initiative that distributed 800 laptop computers to Georgia's EMS providers. Terwilliger's dedication and compassion for being prepared through training and saving lives is quite evident.  His leadership in ongoing initiatives such as the  First Responder and EMT Training, the Georgia Trauma System, the Uniform Core Criteria and SALT Triage, The Hartford Consensus B-Con (Bleeding Control) which includes the Stop the Bleed – Save a Life training.

The 2018 EMS Award nominees were recognized, and recipients were announced. Emanuel County EMS Paramedic Corey Monroe was nominated for the Georgia EMS Educator of the Year Award, and the Emanuel County EMS also nominated for the Georgia Emergency Medical Service of the Year award. Before the awards banquet, attendees spent the day at Georgia EMS Association's 2019 EMS Day at the Capitol and attended a Meet and Greet. The meet and greet provided an opportunity for the members to network with State elected officials. The House and Senate were both in attendance to convene, which allowed the members to observe the Legislative process. 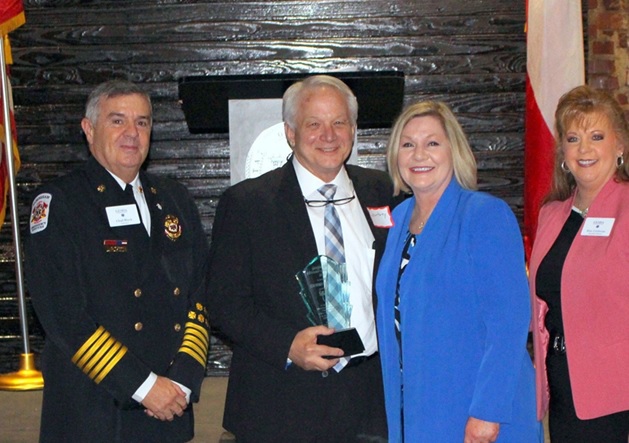