Reaching out for a Healthier Tomorrow

Serving Emanuel County and its families for over 50 years.

James Ray, MD FAAFP was the recipient of the 2018 President’s Award

James Ray, MD FAAFP was the recipient of the 2018 President’s Award. He was awarded by Loy D. “Chip” Cowart, MD, FAAFP – President of The Georgia Academy of Family Physicians (GAFP). GAFP honors members exemplifying excellence in the practice of family medicine and for their national, state chapter and community-based leadership roles and contributions to clinical research and healthcare.

Dr. Ray was born and raised in Fairfield, Alabama.  He received a B.A in Math from Samford University in 1963, and received his Medical degree in 1969 from University of Alabama School of Medicine.  Dr. Ray attained the rank of Major in the United States Air Force while serving in Germany.  Dr. Ray lives in Swainsboro with his wife Harriet, and they have 4 sons: David, Marty, Andy, Stephen, 6 granddaughters, and 2 grandsons.  Dr. Ray has been in practice at Ray Medical Clinic since 1974.  In addition to seeing patients at the clinic, Dr. Ray makes rounds at Emanuel Medical Center, Emanuel Medical Nursing Home, Twin View Nursing Home, Pruitt Healthcare, Scott Health and Rehab, and the local retirement homes.  He is also medical director of Community Hospice in Vidalia.  In his spare time, he enjoys camping, traveling, spending time with his family, and watching Alabama football.  ROLLTIDE! 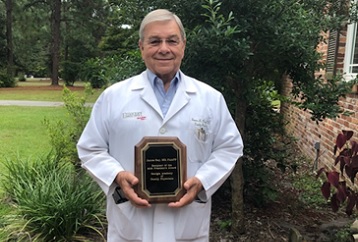